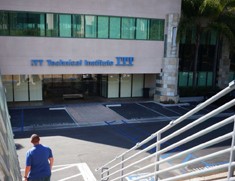 It seems only right that victims of predatory for-profit education companies should have their student loans forgiven. After all, in addition to being left with mountains of debt, former students have worthless degrees from schools that no longer exist, such as those once operated by the defunct Corinthian Colleges or ITT Educational Services.

Because taxpayers backed most of these loans, however, the Department of Education has been loath to forgive them. So it was gratifying to see five former ITT students take matters into their own hands this week by petitioning a federal bankruptcy court to consider loan forgiveness as part of the company’s liquidation.

ITT filed for bankruptcy last year after the Education Department cut off the company’s access to federal student aid. At the time, the company operated 137 campuses in 39 states, providing career-oriented programs to 43,000 students under the names ITT Technical Institute and Daniel Webster College.

The company was hugely successful for years, deriving most of its revenues from federal student aid. Over the past 10 years, ITT students took on over $7 billion in debt; roughly $1 billion were private loans.

And for years federal regulators let ITT schools keep operating, even though they were well aware of the company’s dubious practices. Since 2014, for example, ITT had been under heightened scrutiny by the Education Department, and state regulators had accused it of misleading students about the quality of its programs and their job potential upon graduation. The Consumer Financial Protection Bureau filed a lawsuit against ITT almost three years ago, accusing the chain of predatory student lending.

But even this evidence of widespread impropriety at ITT hasn’t helped former students discharge their debts. So on Jan. 3, lawyers at the Project on Predatory Student Lending at Harvard Law School filed to intervene in ITT’s liquidation, which is currently being overseen by James M. Carr, a federal bankruptcy judge in the Southern District of Indiana.

Abby Shafroth, a staff lawyer at the National Consumer Law Center, a nonprofit organization in Boston and Washington, applauded the former students’ filing in the liquidation. “It’s a creative approach to putting student loan borrowers at the table and making sure it’s not just the banks and some regulatory agencies fighting over the assets,” she said in an interview. “Think about the role and interests of the students, how they contributed to the creation of assets at ITT and what claim they should have to them.”

ITT reported assets of $389 million and liabilities of $1.1 billion to the bankruptcy court. The company had also deposited $94 million in escrowed funds with the Education Department before it collapsed. That money could go toward some loan forgiveness.

The company’s assets include almost $80 million owed by ITT students who were enrolled at the time of the bankruptcy filing or who had withdrawn within the previous 90 days. It’s possible that some of this $80 million was taken on by students to pay for classes that were never convened because the company collapsed.

The question of what will happen to this $80 million looms large among the ITT students. But fairness for the students is only one of many considerations for Deborah J. Caruso, the trustee appointed in the bankruptcy case <and partner of Rubin & Levin, P.C.>: She has asked the court for permission to continue collecting that money from students on behalf of the company’s creditors.

Lawyers for the former students hope to stop the debt-collection process, since the company violated state consumer protection laws. In essence, they want the court to forgive the loans and prevent the money from being dispersed to creditors of ITT.

Ms. Caruso acknowledged that the liquidation process was a difficult balancing act. “If there is a recovery to be had for former students,” she said in a statement, “the trustee wants them to get it. But the trustee also needs to be sure that the student claims do not wipe out recoveries for other creditors.”

The lawyers working on behalf of the students also hope the judge will make a legal finding that ITT violated state consumer protection laws. This would make it easier for the students to get their loans canceled by the Department of Education. Finally, the lawyers have asked that the five students’ claims be asserted on behalf of all former ITT students.

“We’re trying all the angles, all the avenues,” Toby Merrill, founder and director of the Harvard project, said in an interview.

The filing contains 1,084 pages of powerful testimony from over 800 former ITT students and employees. They describe deceptive practices at the company and outline the hardships students experienced after graduating with crushing debt and useless degrees.

“They had promised 90 percent job placement in the field that I was studying,” one student recalled in the filing. “When I finished the program, no one would give a job in the internet security field because I went to ITT.”

A former employee in Ohio described how ITT manipulated students’ post-graduation job records to make it seem that they had gotten work as a result of their schooling. “Surveys were sent to students to see if they were employed and where they were working,” the former employee recounted. “If the student marked working at McDonald’s, she was to mark they were working in their field of study.”

These testimonials are significant for several reasons. They show a pattern of practice that dispels any notion that bad behavior harmed just a handful of ITT students. In addition, they are being disclosed publicly for the first time because ITT had forced students to bring their grievances through private arbitration.

“All of these students have filed their own claims with the Education Department,” said Eileen Connor, director of litigation at the Harvard project. “But the Department has been sitting on them, and they are not visible in any way.”

I asked the Education Department about the legal action taken by the former students in the ITT bankruptcy. Kelly Leon, a spokeswoman, declined to comment on the litigation but provided this statement: “In any borrower defense case, the Department of Education will consider all relevant evidence and information before it, including relevant findings by a court.”

Student advocates are watching the case. One is Pauline Abernathy, executive vice president of The Institute for College Access & Success, a nonprofit research organization. “The record is clear that ITT knew a majority of its students would never be able to repay those high-interest private loans, but it made them anyway,” she said. “That makes the bankruptcy judge’s decision on ITT’s private loans particularly critical — are they legitimate assets or not?”